Design excellence is all about collaboration and engagement, a concept truly embraced over the years by Bolon. With a history of working with industry leaders and artists, they’ve collectively broadened the borders of art, pushed the boundaries of design and formed friendships beyond our most creative dreams. From exploring new ways of using Bolon, to creating collaboration collections enjoyed by architects and designers across the globe, join us as we explore some of Bolon’s designer friends and collaborations.

Patricia Urquiola –  Women At The Top

In 2021, Bolon revealed a new design collaboration and welcomed renowned architect and designer, Patricia Urquiola to the extraordinary list of Bolon friends. Together, the Bolon team and Patricia shaped a contemporary architectural flooring collection with a modern and soft appearance. A perfect match of performance, playfulness and craftmanship. 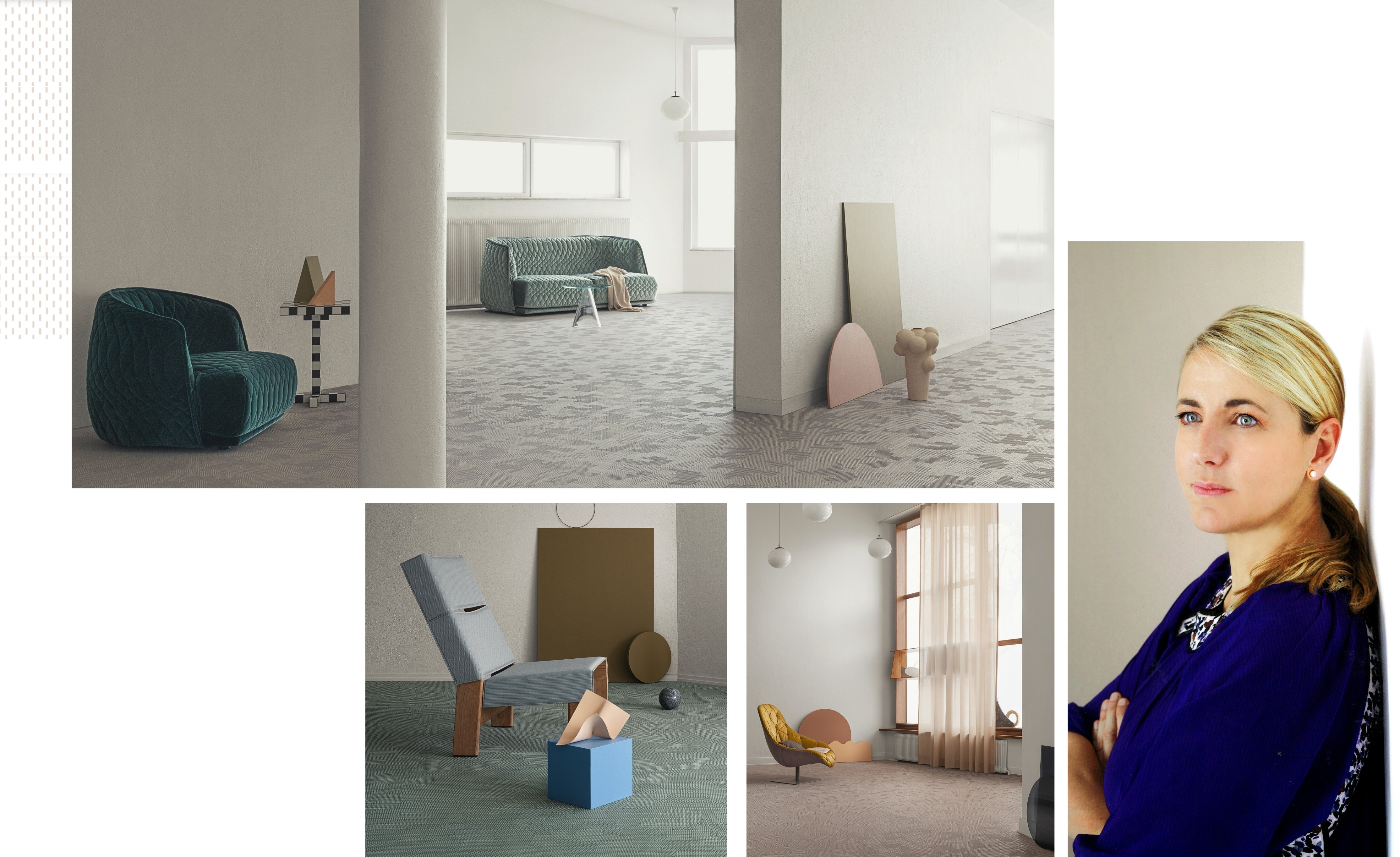 Patricia Urquiola is one of the most influential designers and architects of our time. Pursuing two professions, she moves freely between interior architecture and product design – a shift that constantly drives her to develop new approaches to her craft.  In her collaborative work, the processes of finding the human aspect and exploring craftmanship often become the very essence of her design. This was the case for the Bolon by Patricia Urquiola collection, as Patricia recognised that Bolon’s weaving technique resembled traditional Japanese Sashiko stitches. The result is an expressive yet subtle flooring collection with a natural elegance. 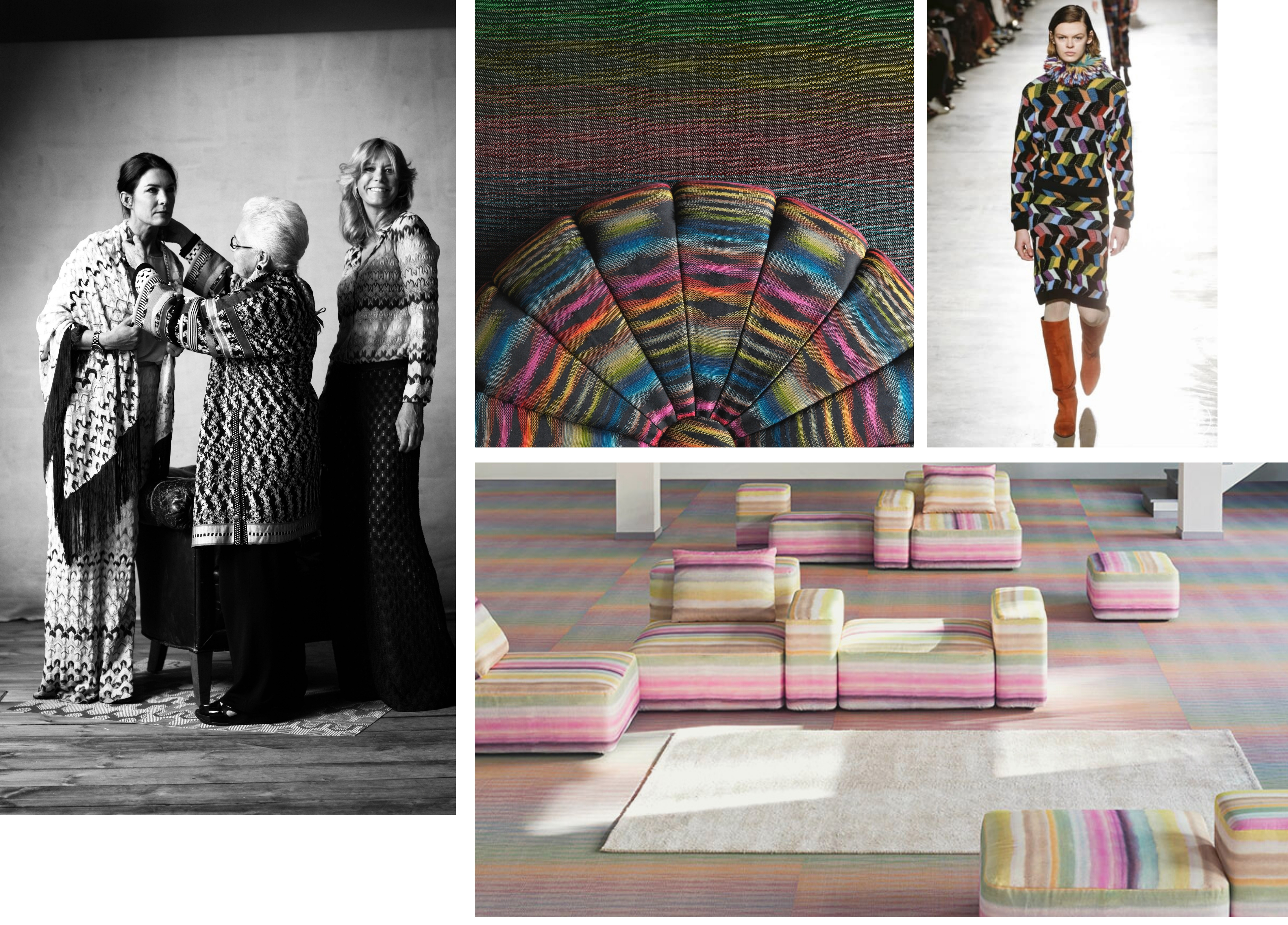 The flooring collection is based on Missoni’s classic patterns and generous range of colours, which Bolon reproduced using the latest weaving technology. In late 2013, the design brands collaborated again to introduce four new colours to the collection. This confident, playful, and visually striking collection was again added to in 2015 to include an interpretation of Missoni’s classic Zigzag pattern.

In the world of architecture, the name Jean Nouvel commands instant respect. His major breakthrough came in 1987 when his design for the Institut du Monde Arabe in Paris received critical and commercial acclaim. A self-confessed admirer of Bolon flooring for many years, the initial collaboration for the Stockholm Furniture Fair involved a spectacular, gravity defying interpretation of the Create collection.

Like Bolon, Jean Nouvel strives to challenge conventionality, a task he believes is made more achievable through harnessing the unique characteristics Bolon flooring can offer. In 2016, Bolon and Jean Nouvel collaborated to launch the flooring collection Bolon by Jean Nouvel Design which was launched during Nouvel’s exhibition at the Musée de Art Decoratifs in Paris.

Founded in 2004 by partners Lyndon Neri and Rossana Hu, Neri&Hu Design and Research Office is an architectural design agency based in Shanghai, China. Known for their inter-disciplinary approach to design and architecture, Neri&Hu create a new paradigm in contemporary design by fusing local culture with international spirit, often combining Asian simplicity with Western influences. Working on projects in many countries, the team’s projects range from interiors, contract and product design.

The first creative collaboration between Bolon and Neri&Hu was displayed during the Stockholm Light and Furniture Fair in February 2018, where the iconic design duo created a stand concept that interprets the Scandinavian landscape. The collaboration sparked an interest for Bolon’s material and potential future collaborations.

The dynamic design duo were Guests of Honour during Stockholm Design Week 2019. As a part of the award, they were given 200 m2 in the entrance hall to create and inspire. They chose to use the space to shine the spotlight on social issues unique to China, specifically the disappearance of villages and village cultures – an alarming trend which is significantly impacting traditional views on community, family, and cultural roots. By installing Bolon Jean Nouvel No. 3, Neri&Hu created an exhibition that represents and captures the very essence of the traditional Chinese village, while also offering viewers first-class design and architecture together with Bolon.

Finding meaning is a recurring theme within Doshi Levien’s work. Recognized by industry leaders, Doshi Levien is an internationally acclaimed design studio founded by designers Nipa Doshi and Jonathan Levien. Nipa’s approach is rooted in her plural upbringing and astute eye for visual culture. Jonathan’s approach is rooted in industrial precision, combined with the sensuality of a makers hand and deep understanding of materials. Working across various disciplines and industries, the London-based pair create furniture, furnishings, installations and accessories for design brands. 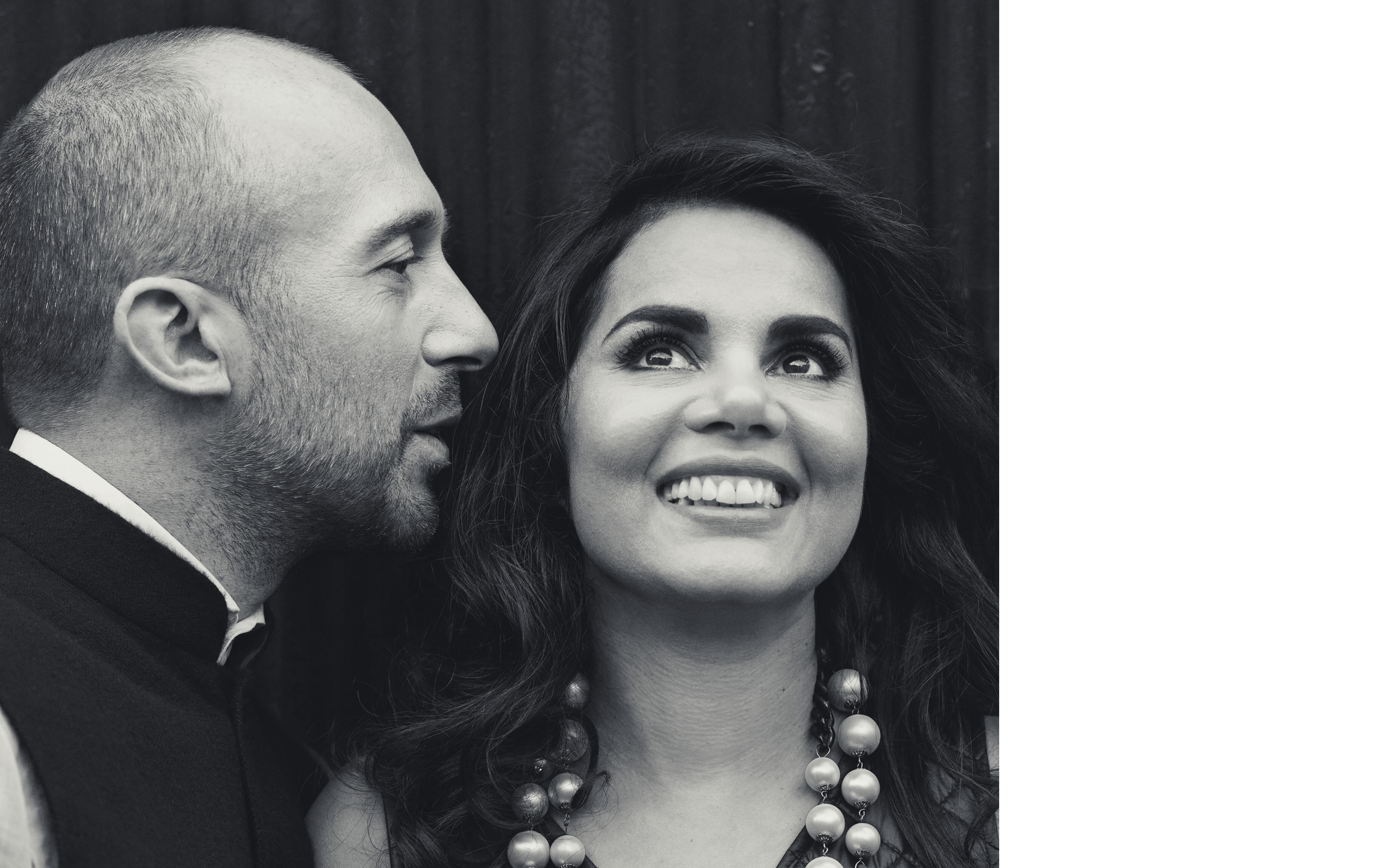 In 2015, a creative partnership was established with the design duo for an architecture-infused campaign, ‘Material Interventions’. The visual treatment tied into the release of Bolon By You. Taking inspiration from fashion, art and culture, the collection launched at the 2016 Stockholm Furniture Fair where Doshi Levien lent their expertise and designed Bolon’s stand to showcase the new collection. Displaying their keen eye for an impactful presentation, the stand was created as an open gallery and the collection was installed alongside various architectural materials.

Giulio Cappellini is a legend in the design world, an influential furniture producer and an appreciated member of Bolon’s inner-circle. The first Cappellini-Bolon collaboration came about in 2008 when Giulio was asked to furnish the entrance hall of the Stockholm Furniture Fair. Since then, Giulio Cappellini has used Bolon flooring in several projects, among others in the Malpensa and Linate airport VIP Lounges in Milan, Italy. Giulio Cappellini uses Bolon flooring in all his new showrooms worldwide. Not one showroom is like the other, since he always wants to adapt the concept to the special atmosphere of the city and the place itself.

In 2017, Giulio teamed up with young Italian designer, Antonio Facco to present a tailor-made design using custom Villa La Madonna upholstery from Bolon. The 2015 ANEMOS collection, produced by Cappellini received a makeover and the iconic table and poufs were transformed through Antonio’s vision. The impressive pieces were presented during Stockholm Design Week at Bolon’s exhibit “Innovations at Heart” in February, 2017. The collaboration has sparked an interest for potential production and additional experimentation with Bolon. 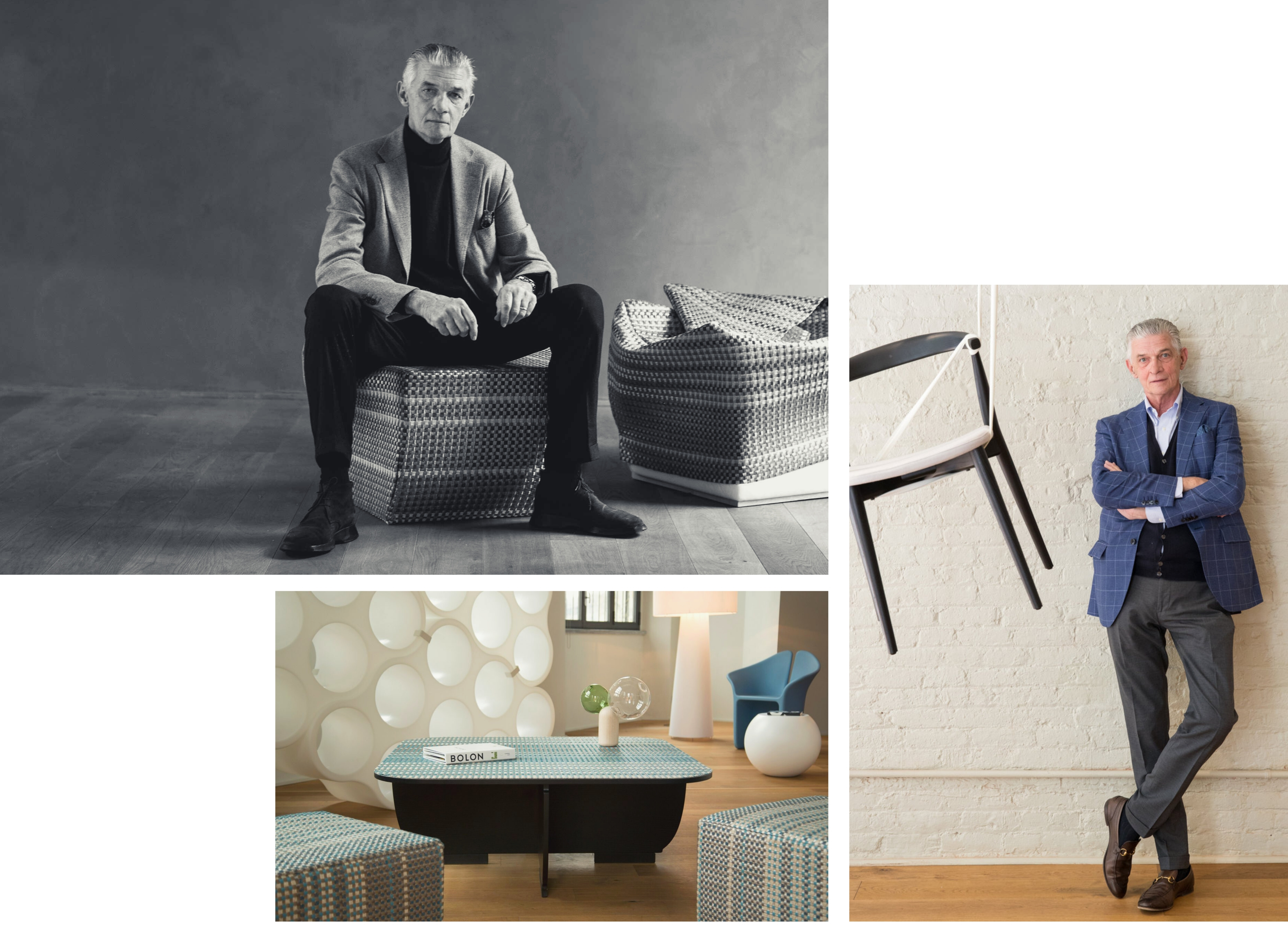 In 2020 BOLON added a new friend to the already existing portfolio of influential names within the design industry. As masters of the all things interactive, New York-based design practice, Snarkitecture created a multi room booth for the 2020 Stockholm Furniture & Light Fair. The space highlighted Bolon’s collections, but also gave visitors a chance to slow down and engage. The booth was a labyrinth which took visitors on a journey through multiple rooms that communicated different features of Bolon’s story, products and performances. The space was designed for interaction and included media displays, design tables and product demonstrations.

Lead by partners Alex Mustonen, Daniel Arsham and Ben Porto, Snarkitecture’s work focused on the reinterpretation of everyday materials, structures and programs to new and imaginative effect, making them the perfect partner to have helped create a booth design full of unexpected and memorable moments. 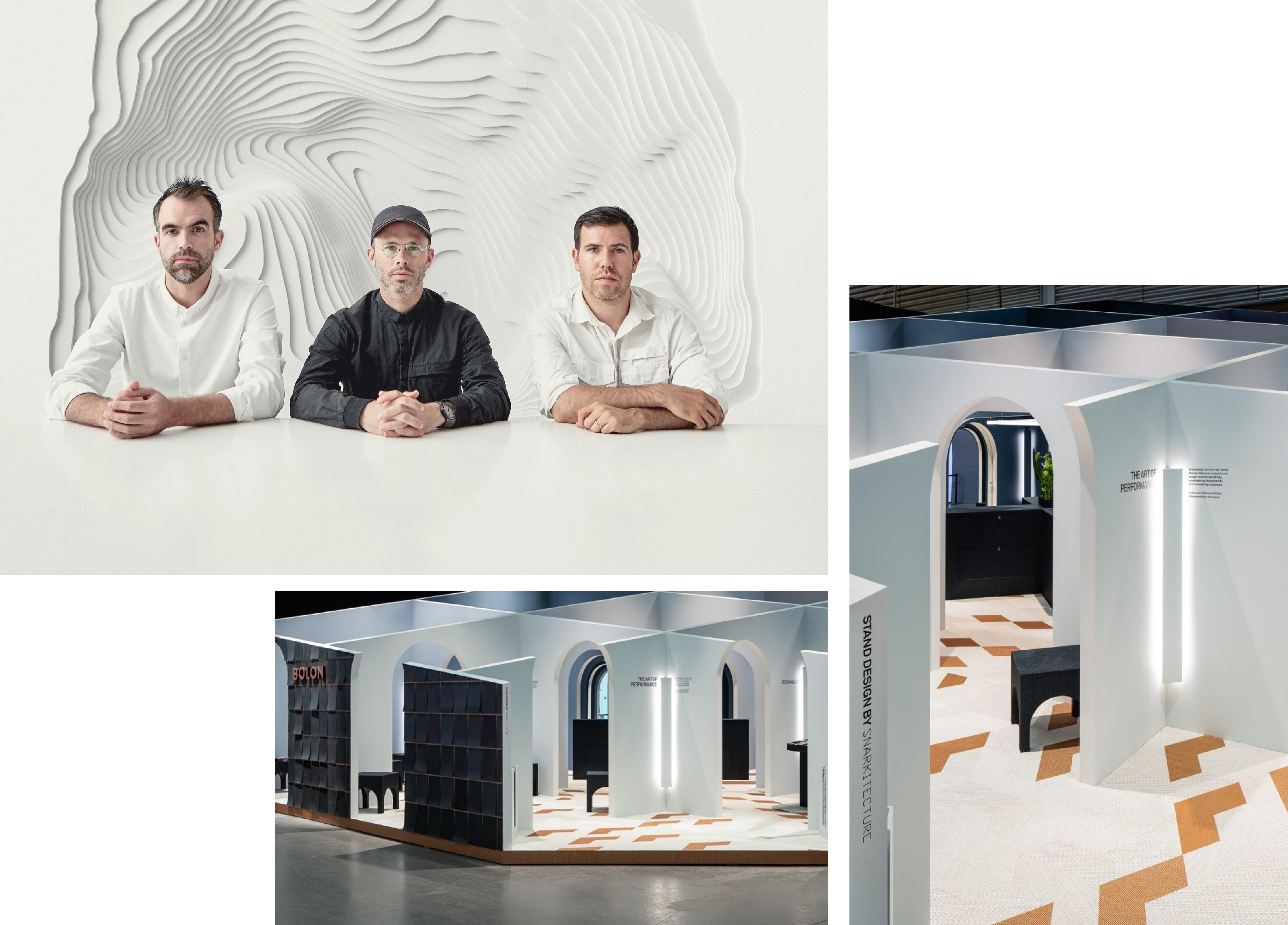 It has not been revealed what’s next for Bolon collaborations, however we’re certain that Bolon will continue to work with artists and creative minds to transform the flooring industry, push boundaries and form lifelong friendships.