In a photoshoot at Textilhögskolan, the Swedish School of Textiles, three creatives came together to document the fashion designs of graduate Louise Linderoth, whose collection reinvents a ubiquitous item of everyday clothing: jeans.

Each image features a figure sat in a wheelchair wearing ripped denim that has been designed specifically for a wheelchair user. These photographs show jeans designed by Louise Linderoth, a student at Sweden’s Textilhögskolan School of Textiles. Linderoth suffers from a spinal chord injury that means she uses a wheelchair, and which previously left her dependent on crutches for 12 years. For her graduate collection she set out to challenge some of the conventions around disability in fashion. “I soon realised how difficult it is to sit in a pair of jeans for a long time as they don’t follow the shape of the body in a seated position,” she explains, “so I started deconstructing my own.” Turning to her skills as a fashion designer, she began to develop a collection intended to prove that a person ought not be defined by being able-bodied.

Linderoth began by taking apart existing jeans to grasp the garments’ underlying pattern, and from there began constructing reinvented versions. She wanted her designs to be recognisable as jeans, while still pushing the limits of the typology’s familiar silhouettes. Rather than obsessing over the garments’ construction, Linderoth prioritised unpicking preconceived notions of the human body.

“I use the human body as inspiration at every stage of developing a product, both from the perspective of the wearer and the viewer,” she says. “It’s fun to interact with our preconceptions, to play and argue with them through art and design.” One of the ways in which Linderoth experimented with form was by  exaggerating the height of high-waisted jeans – a design technique that makes the legs look longer. Some of her jeans don’t stop at the waist at all, but instead reach up to the chest or even go all the way to the shoulders. The result is a collection of seven inspiring items that range from tops to one-pieces: all tailored to suit the seated position of a wheelchair user.

More than fashion items, these designs are conceptual sculptures that make a powerful statement about fashion’s bias towards the able-bodied – both in terms of the styles of clothing that dominate, and the models typically seen on catwalks. 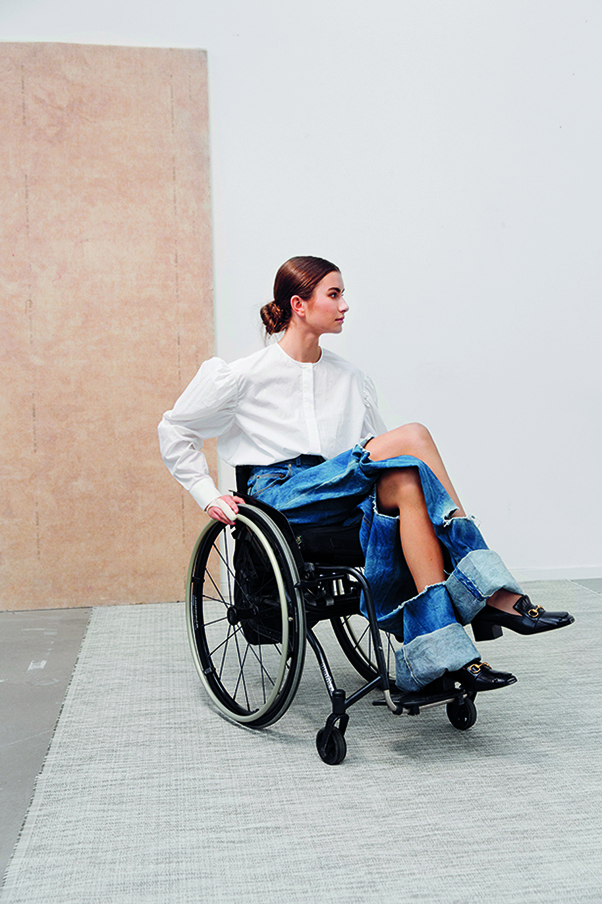 Linderoth showcased her collection during the Stockholm Spring Fashion Week in 2017, and her models went down the catwalk in wheelchairs. Her bold, challenging statement about the way the fashion industry deals with the human body was picked up by Vogue as a highlight of the graduate show at the Swedish School of Textiles. Vogue also reported that he the students had been “encouraged to dream, rather than conform to existing commercial standards”, which led many of the young designers to find inspiration in the work of Comme des Garçon’s Rei Kawakubo. This
influence can certainly be detected in Linderoth’s designs. Kawakubo has become renowned for her use of sculptural garments which materialise in radical forms that prompt reflection about the body rather than seeking to flatter. An example of these are Kawakubo’s Body Meets Dress – Dress Meets Body garments, whose forms suggest deformities or tumours and which were included in the recent solo exhibition of Kawakubo’s work at the Metropolitan Museum of Art in New York.

The resulting images reveal Salomonsson’s penchant for portraits and fashion images that sit outside of the classic studio set-up, and which instead offer a more natural and personal take. Salomonsson’s artistic approach to photography is channelled and developed mainly through Nuda, a print magazine focusing on art, photography and fashion, which she describes as her “passion project”. The third edition of the magazine is now underway and will showcase the work of photographers whom Salomonsson encounters on Instagram and through her extensive network of collaborators.

The photographs were styled by Linnea Montano, who opted to pair Linderoth’s jeans with textured tops and shoes. From a furry cream jacket with a striking green trim to a sculptural, crisp white shirt, they add a sense of spikiness to the blue denim. Montano’s design process involves reating a mood board, and then gathering props, clothes and accessories with which to formulate a concept. This culminates in a fitting with the model, in which Montano trials the looks in advance of the shoot and makes adjustments. “I enjoy the versatility of the process,” she says, “as well as the incredibly creative people I get to meet and the opportunity to create a story that will hopefully last.” 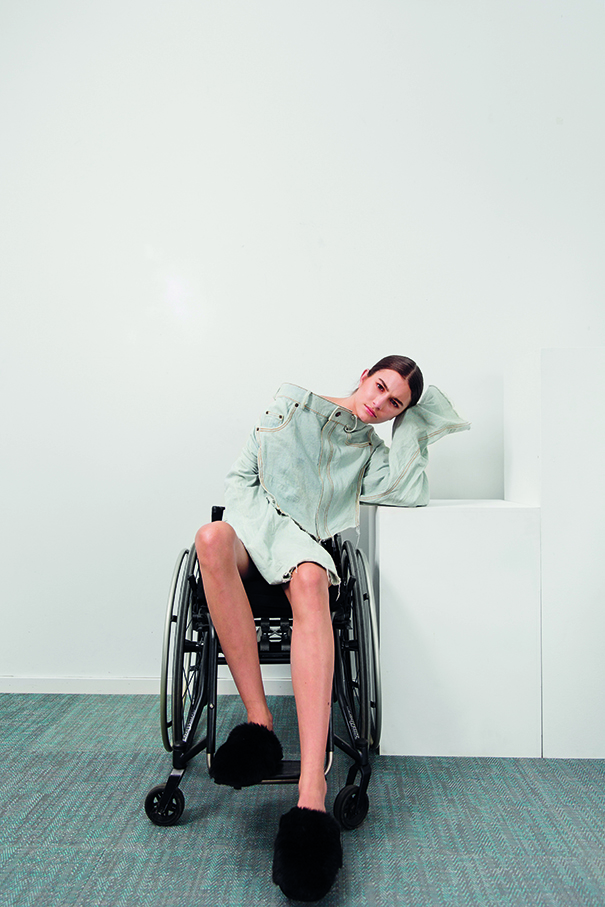 The shoot’s location needed to be suitable for wheelchair users, and the flooring for the images was chosen accordingly. “It can be hard to push a wheelchair forward, but Bolon’s floors were very good for that,” Linderoth observed. “Carpets make it feel as though you are going uphill or on grass, but Bolon’s flooring is flat, so you can roll on it easily.”

One of the floorings chosen for the shoot
features a brown warp and a blue weft thread, and comes from the Bolon by You collection. Meanwhile, the light grey floor featured in the images comes from Bolon’s Elements Traditional denim patterns were deconstructed for Linderoth’s designs. collection, which will launch in February 2018.

Armed with essential skills from her BA in fashion design, Linderoth wishes to keep on developing clothing that is both wearable and challenging. “I want to make fashion that is about people,” she says, “because fashion is for human beings and human bodies, not for the plastic figures we see in shop windows.” 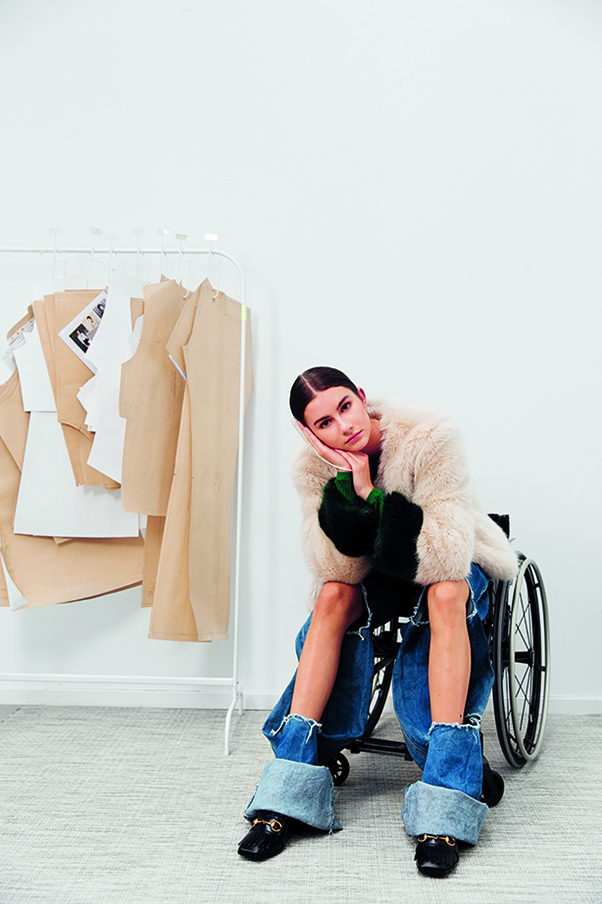