Inspired by nature and craft textiles, Bolon is to launch four rugs and exhibit its new Elements range of flooring in a Neri & Hu-designed installation at the 2018 edition of Salone del Mobile.

Having debuted in 2017, the Villa La Madonna and Duet rugs are made with a blended material, developed by Bolon, that offers a soft aesthetic and beautiful tactility, and which demonstrates the company’s ongoing expansion into interior design. 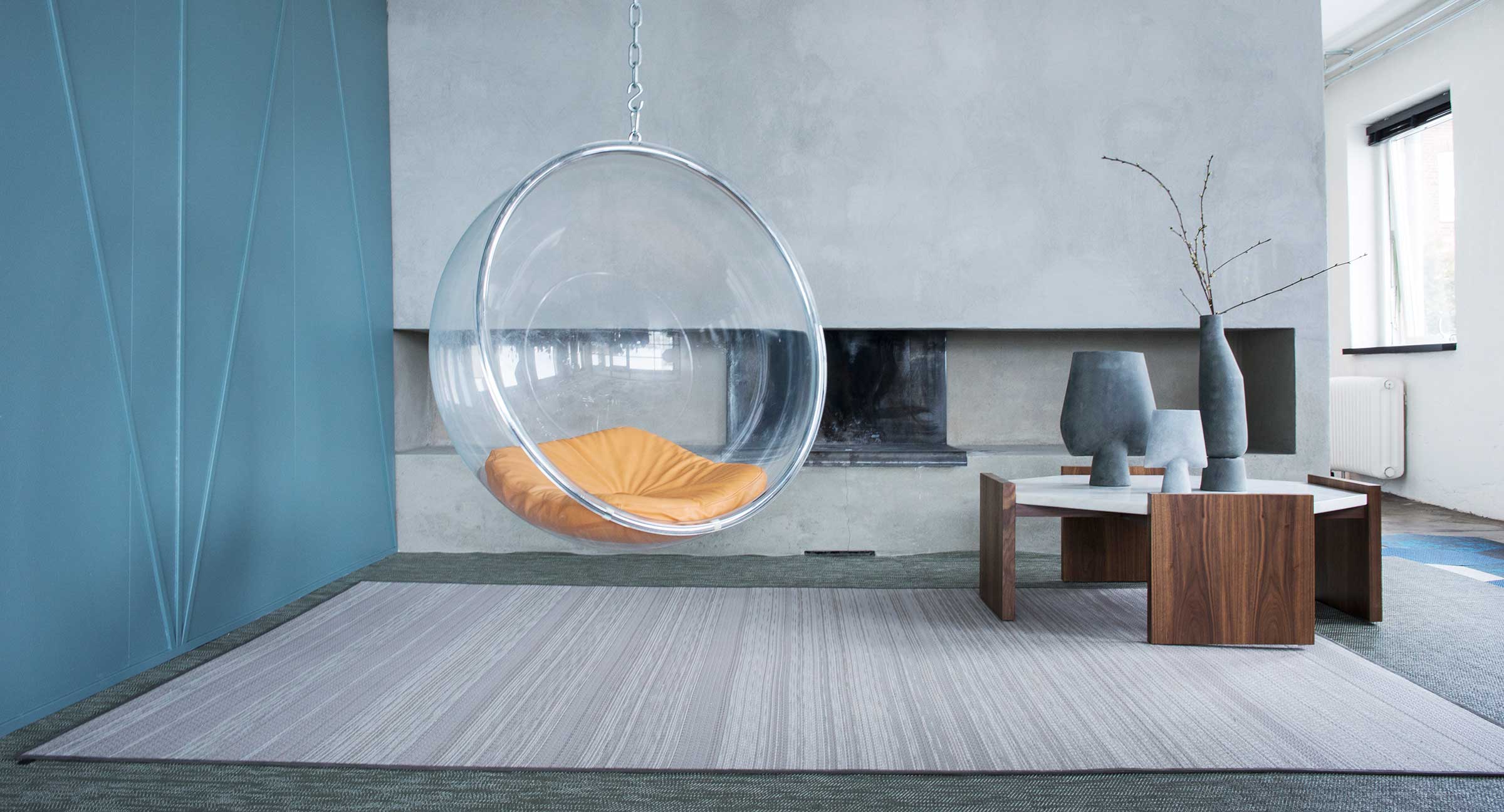 “For Bolon’s 2018 releases, nature has been our central inspiration,” says Marie Eklund, Chief Executive Officer of Bolon. ”The earthy colours and textures offer harmony to any room, and allude to Scandinavian or East Asian design heritage.” The four new colours are available in the same dimensions (2 x 3 metres) as the existing collections and feature the same edging.

Bolon’s new Elements flooring collection brings the harmony of the natural world to interior spaces. Discreet and versatile, the 10 designs in the Elements range act as a bridge between objects and their surroundings, demonstrating the positive effect that good design can have on our senses and wellbeing.

The Elements collection launched in February 2018 at Stockholm Furniture Fair and shares the nature-inspired narrative and artisanal appearance of Bolon’s new rug designs. The collection is available in a grey or beige base, woven into weft threads whose shades evoke materials such as Linen, Oak, Ash, Cork, Birch, Marble, Walnut, Flint, Wool and Silk. 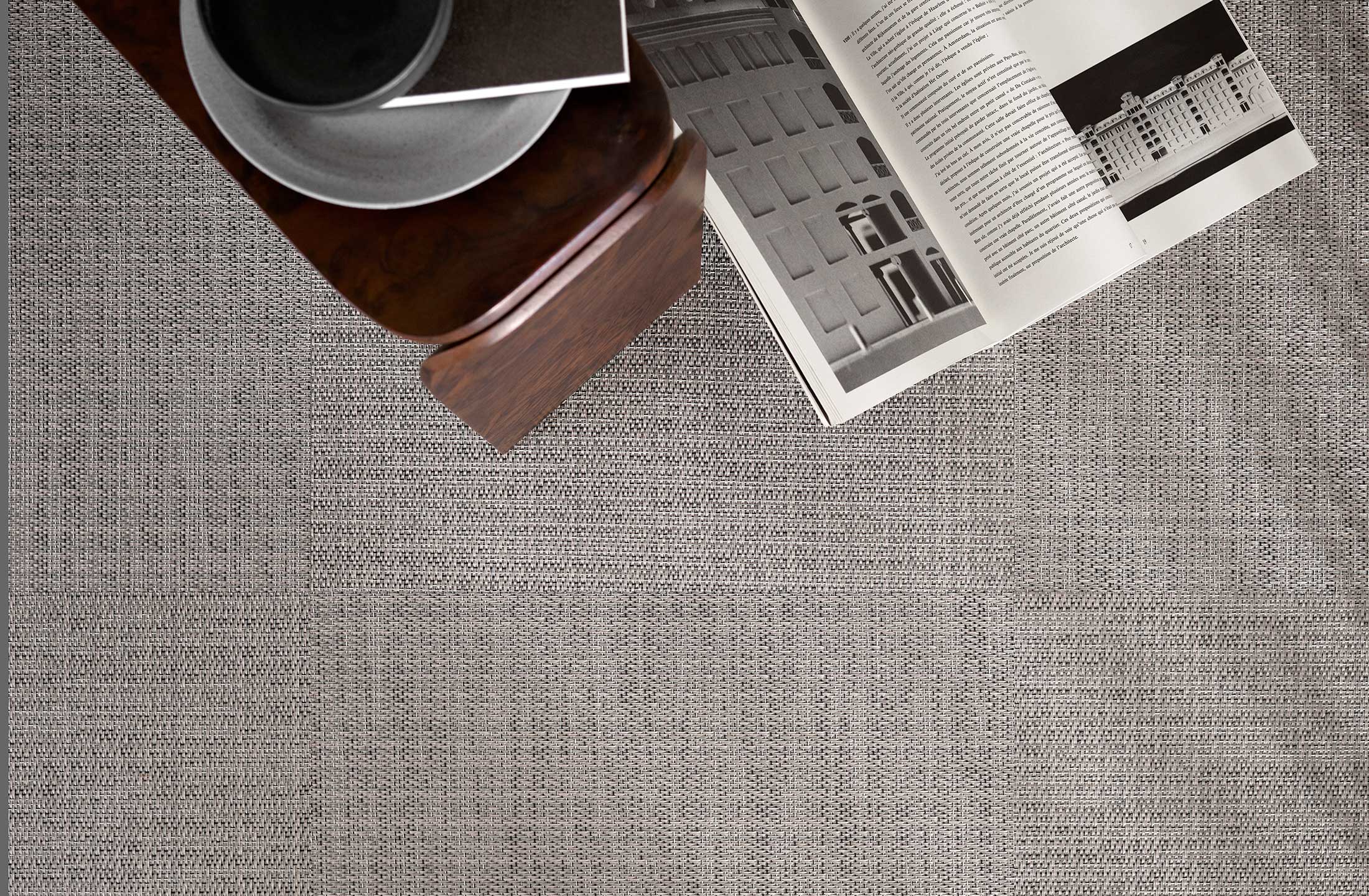 “Its calm, natural aesthetic means it can be used to great effect across large areas, creating a sense of unity in spaces of all sizes,” says Petra Lundblad, Designer at Bolon. Based around the H-thread, a new type of Bolon Yarn, the material has a soft, welcoming aesthetic, but is also resilient to daily wear and tear, allowing Elements to withstand the high levels of footfall that are common in large spaces.

The flooring’s backing is made from up to 33 per cent recycled materials, with acoustic qualities also available as a backing option. Each of the 10 designs will be available in rolls, 50x50cm tiles, or in Bolon Studio tiles.

The studio has based its design for the Milan stand on the concept behind Bolon’s Elements collection, creating a stand that communicates a contemporary, nature-inspired aesthetic that bridges East Asian and Scandinavian design traditions. 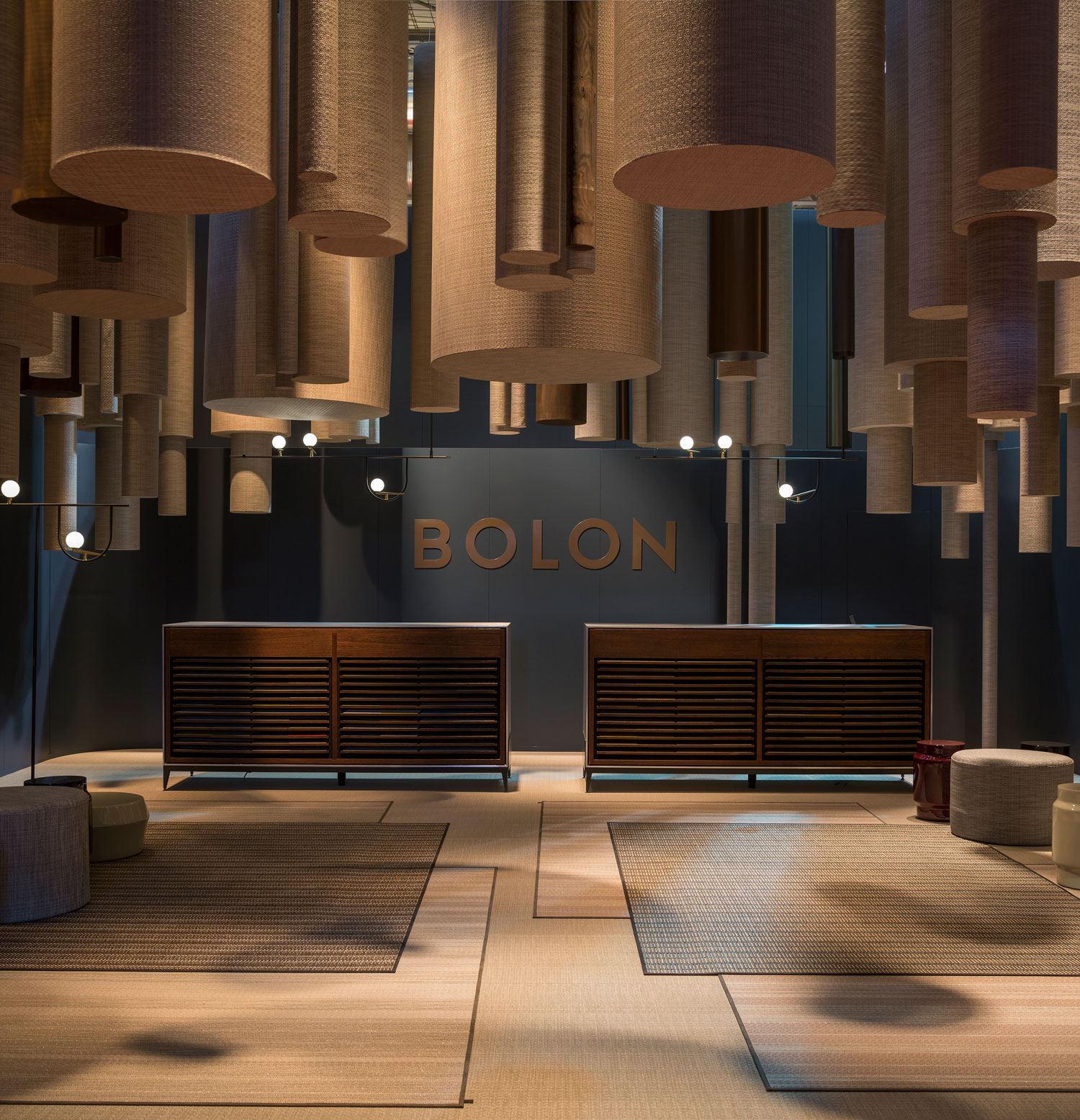 Thick tubes covered in the Elements collection will be suspended from the installation’s ceiling at different heights to offer a tactile experience for visitors to the stand. “The fair stand is like encountering an abstract forest,” says Rossana Hu of Neri & Hu, while her partner Lyndon Neri adds that “the notion of landscape as a space” was paramount to the duo’s installation design.

The suspended rolls, or “trees”, are also a nod to Bolon’s manufacturing facilities in Ulricehamn and the large spools of materials found there. “Nowadays not many brands actually manufacture the products that they’re selling,” says Hu, “so I think to embed that manufacturing history, know-how and expertise into the exhibition stand is really important.”