From architecture and furnishings to ceramics and textiles, colour is fundamental to design. When we first encounter any object, colour is amongst the first things we perceive. Colours interact with shapes, materials and light, as well as with each other. They conjure a web of associations, both with other objects and with abstract concepts. And yet colour is also a volatile property: a poorly selected shade, or a mismatching collection of hues, can jeopardise the success of a design project. “Colour is life, for a world without colour seems dead,” noted the Bauhaus master of colour, Johannes Itten. “As a flame produces light, light produces colour. As intonation lends colour to the spoken word, colour lends spiritually realised sound to a form.”

Missoni and Bolon are both companies that aspire to understand colour’s full significance and potential. The Italian fashion and textile brand has long been known for its vibrant, polychromatic designs and zigzagging patterns, all rendered in delicate, finely woven textiles. Bolon, meanwhile, has developed its vinyl flooring in a panoply of shades, meticulously chosen to work with the patterns that the company’s design team has carefully crafted. For the past eight years, the two brands’ work has come together in Bolon by Missoni, a series of collaborative collections that bring Missoni’s vivacity to Bolon’s flooring panels. Products such as Zigzag – which adapts Missoni’s signature diagonal lines – and Optical, with its interlocking arch-like curves, connect the two company’s aesthetics in a single locus.

Bolon’s Annica and Marie Eklund previously met with Missoni at Milan’s Salone del Mobile before deciding to embark on a formal collaboration in 2011. There were strong commonalities from the get-go. Bolon and Missoni both work with looms, bridging traditional technology with contemporary design. Both are also family businesses with mid-century origins, based in the small towns of Ulricehamn and Sumirago respectively. While Bolon began by recycling textile offcuts into carpets, Missoni was founded in 1953 by former hurdler Ottavio Missoni and his wife Rosita, whose family ran a shawl-weaving business. Ottavio, who had previously designed woollen tracksuits, started experimenting with placing coloured threads in Rosita’s family’s looms. By the end of its first decade, Missoni had established itself as a distinct presence in Italy’s post-war fashion firmament. Since 1981, Missoni Home, which Rosita has led since 1997, has adapted the company’s fabrics to encompass home textiles and furnishings, opening up the fashion house to a wider purview.

At Missoni, each textile is the result of concerted research into colours and patterns. Fabrics in dozens of hues – dyed to order by a local firm – are woven together into samples, which are then assessed until the right matches are found. “Every single combination is trialled extensively and studied with great attention to its particularities,” says Paola Dallavalle, creative manager of Missoni Home. “It’s a long and demanding creative process, where we carefully choose each specific tone.” The Bolon by Missoni range shares this exacting approach. It takes around a year to develop a collection, sometimes more. “Each time it is a new experiment, in which both companies invest important resources,” says Dallavalle. “The development requires special attention to details.” During this period, a brief is developed jointly that sets the parameters of the project, such as how many designs to include, the type of product – whether rolls or tiles – and the general character of the collection. At these initial meetings, Missoni often gives Bolon digital drawings of suggested patterns and samples of Missoni Home textiles. Then, for more specifically visual references, Missoni shares hues chosen to reflect the company’s textile patterns. “Missoni has a very free way of using colours,” says Bolon technical designer Sofie Ekwall. “Each piece has its own colour language, which makes their fabrics really unique and delicate. We investigate what the fabric stands for.” 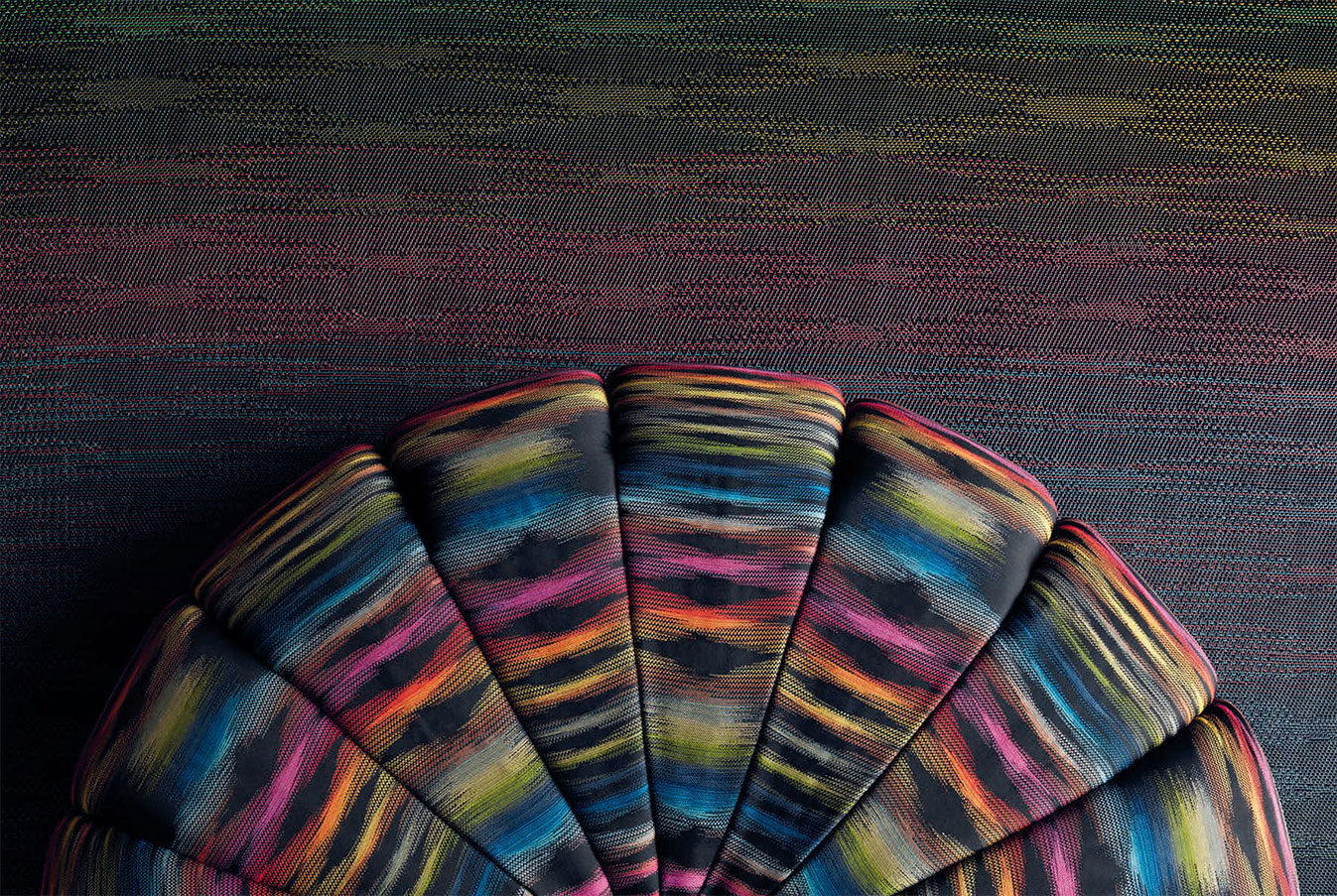 Once they have settled on the tone, sampling begins in Ulricehamn, where, as Dallavalle puts it, “Bolon translates the language of our motives.” Capturing one of Missoni’s textile designs in a similar medium would be tough enough, but capturing it in a material so different to the company’s usual fabrics is sometimes difficult. “Missoni’s textiles are very fine, while Bolon has a coarser, denser structure,” says Ekwall. “The real challenge is to capture the delicate details of the fabric using less
threads and colours.”

Although the hard-wearing, functional nature of flooring allows for less variance than is possible with fabric textiles, Bolon still has a broad repertoire of colours to draw on. To match Missoni’s work as closely as possible, Ekwall melds pigments to replicate Missoni’s colour cards, a careful act of balancing different dyes. These pigments are then subjected to a melting process with vinyl granules, before being extruded through a nozzle into yarns. The resultant yarns are then woven in a loom to create either rolls or tiles of flooring. Thus far, the complexity of the Bolon by Missoni patterns has necessitated using one of the Ulricehamn factory’s seven Jacquard looms: a machine invented in France at the turn of the 19th century, which uses a series of punched cards to control the action of the loom’s warp threads and allows for the precise weaving of elaborate patterns.

The transposition from textile to vinyl can be unpredictable. For Ekwall, this is a boon, and allows the creation of new, unexpected patterns that are, nevertheless, possessed of the spirit of both companies. “The most interesting projects are those where you cannot immediately see what transforming Missoni patterns into Bolon would do,” she says. Trial and error thus plays a significant role in proceedings. “It’s difficult to know if a single yarn is relevant to a design before we’ve tried to weave it,” says Ekwall. “All yarns affect each other.” Up to five rounds of sample weaves are tested for durability and ease of cleaning, and assessed for the saturation and vibrancy of their colours, before swatches are delivered across to Missoni. This continues until a design is produced that pleases both companies.

As Bolon has learnt to translate Missoni’s complex patterns, Missoni has also worked with Bolon’s palette, which is specifically suited to flooring. “Missoni’s way of working with colour is very expressive, focused a lot around mixing and matching good colours with the patterns,” says Ekwall. ”As the years have passed, they have also worked with colours more suited to functional use as flooring.” This growing understanding of each other’s colour development has been essential to the success of Bolon by Missoni: a testament to colour’s centrality to good design.