Towards a More Sustainable Future

To celebrate World Environment Day 2018 and ahead of revealing a new sustainability strategy on 1 October 2018, Bolon is happy to announce two new sustainable initiatives and reflect on its history of environmental consciousness.

Sustainability has always been an integral part of Bolon’s identity, but it is the company’s innovative efforts to reduce its environmental impact during the past two decades that have positioned Bolon as an industry-leader in its field. Bolon has invested significant resources to develop initiatives that let the company tread lightly on the planet, while simultaneously improving the quality of its offerings. True to its founding values, Bolon has set its goals high.

“We see a possible future in which our product will have no negative impact on the environment and can be recycled and reused over and over again”
– Marie Eklund, Ceo

In 2014, Bolon invested in establishing a recycling plant adjacent to its 3000 squaremeters, state-of-the-art production facility in Ulricehamn, Sweden. This facility has enabled Bolon to recycle its pre-consumer waste – making the production process zero-waste – as well as import and recycle pre-consumer waste from its suppliers and other best-practice PVC producers. 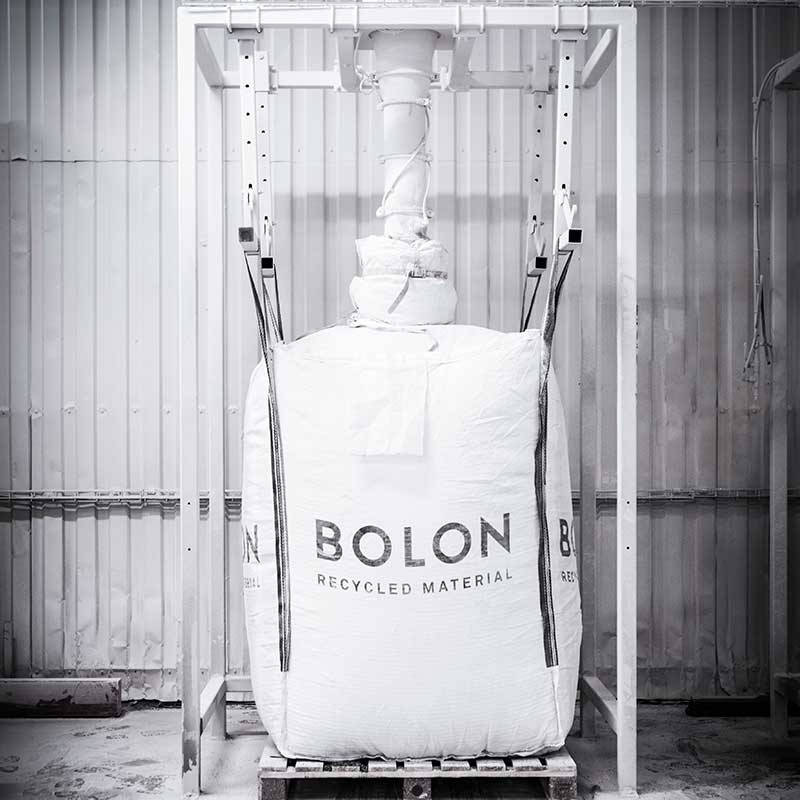 To achieve this goal, Bolon is exploring ways to clean post-consumer waste. In its current state, most of this waste does not qualify for use in the company’s products – post-consumer waste is sometimes mixed with components which do not comply with Bolon’s strict environmental standards.

Cradle to Cradle with Noglue®

Bolon’s next step is to safely recycle its post-consumer waste. Previously, the glue used to affix Bolon’s flooring contaminated the material and made recycling difficult. To overcome this, Bolon has spent two years developing a new technique for installing its tiles and studio products that does not affect the product’s recyclability. 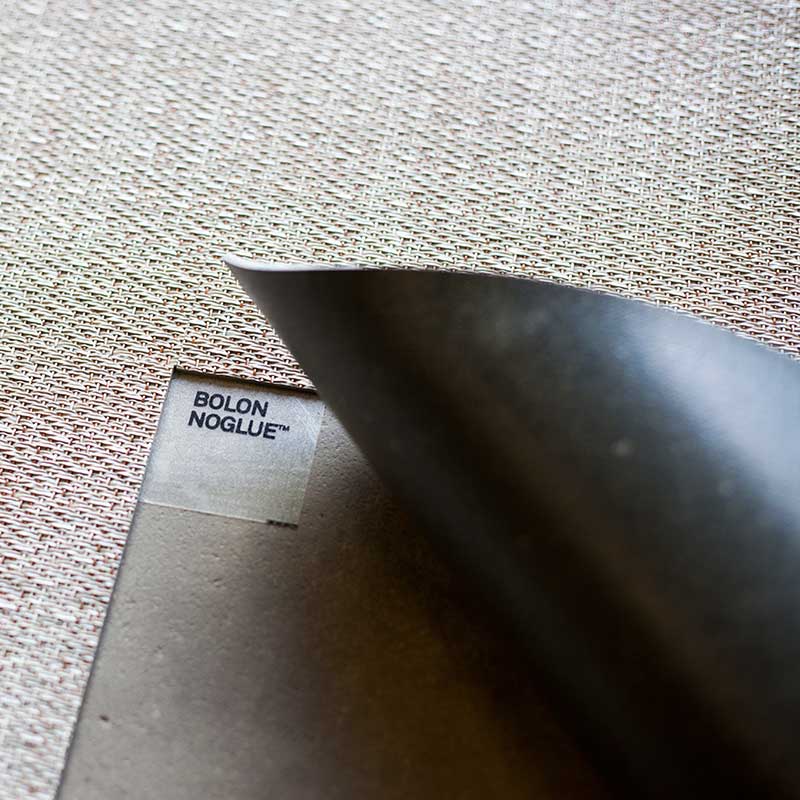 NoGlue® is a tape that allows the flooring to be easily installed and removed without contamination, enabling postconsumer flooring to be recycled at Bolon’s facilities. “This would mean achieving a cradle-to-cradle lifespan for our product, which is a big step towards a more sustainable future,” explains Michaela Ljungdahl, Bolon’s Product and Sustainability Coordinator.

NoGlue® is to be launched in June 2018, while a take-back service for worn-out flooring is due to be up and running in 2020. In the meantime, Bolon offers to store any worn-out NoGlue® tiles until the take-back system is in place. A leasing service for flooring fixed with the NoGlue® technique is also currently in the works.

Bolon only uses the most sustainably produced conventional PVC on the market – a material which is completely recyclable.

Already much improved since it first launched on the market, PVC is made of 57 per cent salt – an essentially inexhaustible natural resource – and is free from harmful chemicals. The high quality of this material means that Bolon’s flooring has a long life-span, and the company offers a 15-year warranty on all its products.

Together with one of Europe’s largest PVC manufacturers, Bolon is currently in the process of discussing a new Bio PVC: a material which will replace PVC’s crude oil component with an extract from renewable sources. In the future, Bolon hopes to replace this component with a local waste-material from the Swedish forestry industry. Bolon’s end goal is to use only 100 per cent renewable resources in all of its PVC products. Bolon is also pushing for innovative PVC solutions by participating in Sweden’s PVC Forum, a body which works with both industry and science to develop more sustainable plastics.

Sustainability at the Heart of Bolon’s Story

A sustainable mindset lies at the heart of the Bolon story. It was what originally motivated Bolon’s founder, Nils-Erik Eklund, when he began making woven rugs from vinyl waste sourced from a Stockholm factory in 1949. It is also what prompted Lars and Monica Eklund, the second generation of the Bolon family, to draw inspiration from traditional Swedish rag rugs when they set out to diversify the company’s range in the 1960s. And it continues to be what the company’s current third-generation owners, Annica and Marie Eklund, strive to promote, even as Bolon has expanded into a design-led organization that caters to clients all over the world.

Bolon was one of the first companies in Sweden to become certified by the environmental management standard ISO 14000 in 1999. It has since been awarded a variety of low emissions certifications from bodies such as BREEAM, GreenTag, Floorscore, and BASTA. “It proves that we’re working in the right direction,” says Ljungdahl. 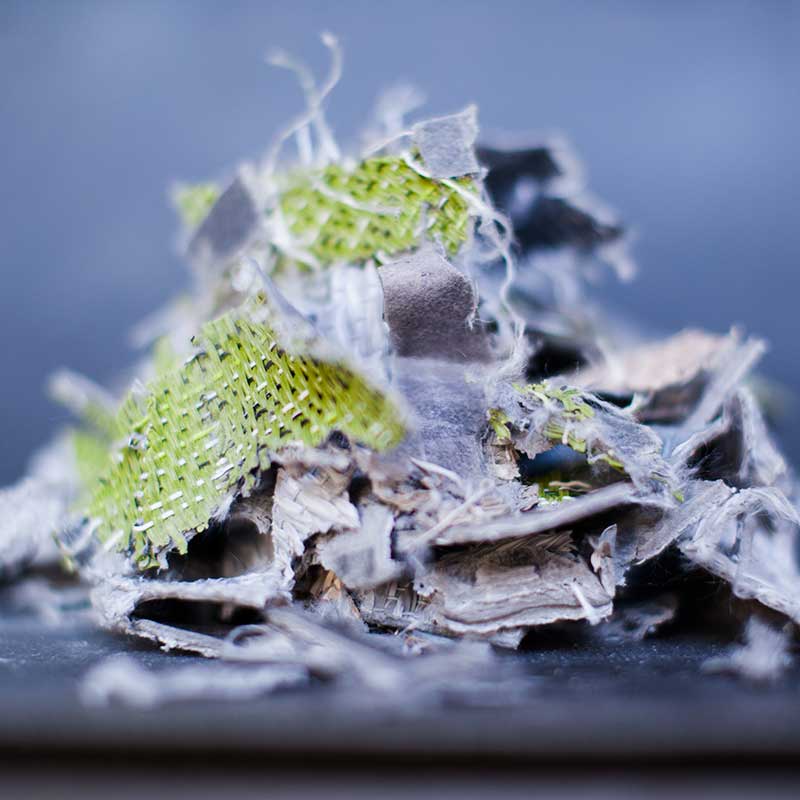 In 2003, Bolon began phasing out lead from its production process, followed by the phasing-out of phthalates in the early 2010s. In 2009, it launched Bolon Green, a holistic concept for how Bolon should approach environmental issues. This was developed with the consultation of Håkan Nordin of Greenpeace Sweden, and it was together with Nordin that Bolon set its sustainability goal “a future without footprints”.

“Nordin is a very well-known consultant on environmental issues,” says Malin Andén, quality and environment manager at Bolon. “We thought that he could do the toughest assessment of Bolon’s environmental standard.” Bolon Green means, among other things, that Bolon only uses suppliers which are located within European Union, and therefore comply with its rigorous REACH regulations.

A recent initiative that also demonstrates Bolon’s multi-pronged approach to issues of sustainability is Green Weld, a cold welding process that substantially reduces the use of environmentally harmful chemicals – in particular Tetrahydrofuran (THF) – during the installation of Bolon’s flooring. Launched in October 2017, Green Weld is better for both the environment and the installer. “We care about the people who work with our products,” says Ljungdahl.